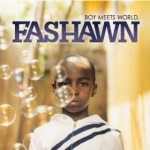 “I came to rearrange the game from all angles, paid dues made my move to Los Angels…”

The homie J.U. suggested that I look up this kidd Fashawn. I was familiar with his work from a joint he did with Evidence and The Alchemist called Far Left. I knew he had skills but I just never got around to peepin any of his music. So based on the J.U. endorsement having gone as far as comparing him to Nas in his “Nasty” days (||), I straight up copped his album, Boy Meets World, off iTunes. Ummm, yeah… its that fever! His flow and lyrical prowess are definitely rooted in East Coast sensibility but his sound is definitely still Cali. This particular track has that Primo-like bounce and he definitely puts in work. Plus anybody who drops my name and payin’ dues on the same record is always good in my book. Sheeeeeit!

yeah, that album is bananas. Been trying to track down that Ode to Illmatic joint but can’t find it anywhere online. I heard that was fever too.

I was just about to say this joint is bananas!! thanks