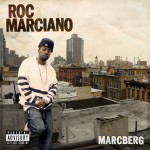 As soon as I touched down in LA and picked up my car I realized that I didn’t have any CDs to bump in the whip. So I decided to hit up Melrose to make my pilgrimage to the West Coast Fat Beats store and see if they had anything I could rock with. I walk in, take a look at some classic vinyl then ask the cashier what he thought was the hottest record on the streets. Without batting an eye, he reaches over his shoulder to hand me the new Roc Marciano album Marcberg. Now I heard it was a tuff album but I was a lil skeptical because the album is being distributed by Fat Beats Records. I guess he sensed that vibe when I gave him the o_O eye and asked if he was sure so he gave me the yuck face and boldly proclaimed that it was easily the album of the year thus far. Taken aback but never one to sleep, I copped it and damn it if I ain’t glad I did.

Now for a lil’ background, Roc Marciano has been one of the most slept on emcees in the game for a minute. Early in his career he played the background as one of the more low profile members of Busta’s Flipmode Squad, consistently crushing their album cuts with trademark NY lyrical dexterity. Since the Squad disbanded he’s kinda been MIA for a bit but he finally came back to drop his impressively self-produced album, Marcberg. Let me just say out the gate that I’m a sucka for that gritty “Raw ’94” New York sound. It’s something I (and the game) have been missing for a minute – just pure beats and rhymes. This album is a throwback to that era with its dark, gritty, bottom-heavy production, lo-fi Wu-style dirty mixes and classical NY lyrical content. In my opinion this album could have easily pulled in 4.5 mics in the pre-Zino Source era. I knew Roc was nice but I was surprised to hear how well he put this album together. Especially given the fact that its mostly self-produced. I chose to share Ridin’ Around ’cause well, its the only thing I’ve been listening to while I’ve been driving around LA. But I’ve supplied a few more joints for your listening pleasure so you can understand why this album comes so heavily endorsed. Picking up this album is a no brainer for any golden era hip-hop head. You know the routine, no downloads. Go support good music.

One reply on “Roc Marciano – Ridin Around”

Yeah, this is probably the best album of the year thus far.