Here I am. In LA! Sure the first day didn’t go so smoothly but I’m hyped. This is where I’ve always wanted to be. The land of sunshine and crooked ass one-time. I got my whip, a little bit of chips and a heart full of optimism. Saturday morning, I take a walk through the city, soaking up the sweet sunshine and hot ghetto-ness that is Downtown LA. Its like they tried to create a lil’ slice of NY, then said, “ahh, fcuk it” and gave up. I’ve already seen more Mexican folks in a day than I’ve seen in my entire life and I have Mexican folks in my fam. Bananas! But I’m all about it. Took a nice long walk through those barren streets looking for a NY fitted. One thing you must know about me is that I’m a contrarian. For the last year I’ve been rocking an LA Dodgers hat in Brooklyn. Bull stares and side eyes a’plenty but fcuk it, I’m “different.” In LA, its only right that I keep up my M.O. and rep NY hard. Per my cousin Teisha’s instructions: strictly Fitteds and Tims…no doubt! But of course, I can’t find a proper Yankee fitted in LA. Really, what was I thinkin’! So I’m stuck frontin’ in my Dodgers cap with that trying too hard NY ditty-bop… I finally made it back to my room, pressed to find a place to live while I’m out here. I only have this swanky ass hotel room booked for a few days. So I do what everyone else does, hit up Craigslist. That was the beginning of the end! I’ll explain later… I quickly found a spot, met up with the dude, give him my deposit and get my keys. Boom! I’m set. Everything’s luv luv. Or so it seemed…

Monday rolls around and its the first day at my new gig. I’m hella excited, son (happy Alana?!)! Always love to be in new surroundings, learning new things. Everybody’s cool as hell, from the bosses down to the interns. I’m excited. Then, slowly but surely, the REAL side of LA begins to rear it’s ugly head and the bad luck I thought I’d left behind in NY popped up again.

First, I decided to swing by the infamous In-N-Out Burger to grab some lunch and see what all the fuss is about. I pull up to the drive thru and its packed. There was a huge truck protruding from its parking space and the drive thru line on the other side. I’m feelin’ myself because I’ve been driving pretty well so far, a few close calls but nothing major. So I decide to try to squeeze through that tight space and get in line…Screeeeeeeech! I scratched the whole right side of the car and tore the license plate off the back of the truck. My LA buzz went from a 10 to about a 5 in that moment. Then these three ese’s run up on my car shouting “yo, WTF holmes!” I shit you not! (c) Logan. I hopped out the car ready to fight (and lose) because all three of them looked fresh out of county. But after a quick inspection, most of the damage was to my rental and even that wasn’t too bad. Sounded worse than it was. Funny thing is, they actually turned out to be cool. No drama. One of the dudes just mashed the license plate back into place, gave me dap and wished me luck…

Few days later, I head up to Hollywood to hang out with my newfound friend Soma and grab something to eat. Parked my car in a parking lot nearby and headed over to The Waffle. First off, we waited for like a half hour for our food. Other people seemed to be getting theirs before us. We’re both black so you know I was ready to flip. The food finally gets there, we eat, walk around for a bit, then I head back to my car. I’m getting ready to pull out of the lot and this cop stops me and asks to inspect my car. Turns out some kid was walking around the lot keying people’s cars randomly and guess who got caught up in the BS. Hopped out the car and saw a scratch across the trunk of rental. Waited for an hour while the cops collected everyone’s info then bounced. New buzz level: 3.

Next week, I’m chillin, playing ball with some of the guys from work. I’m running around trying to dunk like I’m still in my 20s or something. Rusty as hell. We played for about an hour, fresh new iPhone 4 in my pocket the whole time. I grab the ball to do one last little lay up. My phone falls out of my pocket and I hear this “crack!” Flipped over the phone. I fcuked around and shattered the glass on the back of my iPhone. Although I was glad it was only the back side of the phone I was pissed because I was planning on trading it in for an Android phone that week. Buzz level: 1. 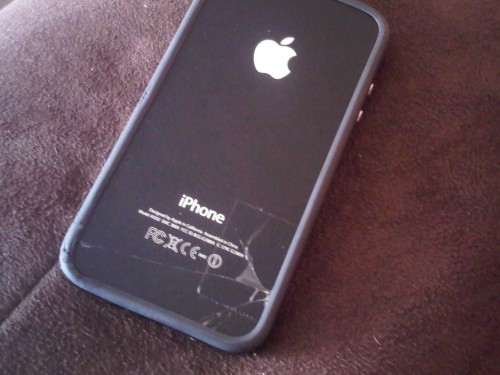 That night, I finally get back to the hotel downtown. Ready to just crash and put everything behind me. Then I get a text from the dude that I was supposed to rent my apartment from saying I can’t move into the apartment the next day. There was some sort of delay and I won’t move into the place for a few days. SMH. Buzz level: 0

The Devil is happy.

1. Thanks for the sample acknowledgement.
2. “The best cats go through shit” – The Great American Poet Dennis Coles
3.http://www.youtube.com/watch?v=pFCBRBNkSYk

As a NYC native who’s been in Cali for five years now… I’m going to have to ask you to stop using the word “hella.” You’re actually “mad excited”… got it?

lol. got it! but I’ve been sayin’ hella since high school. Started out with me snapping on my girl Princess from Cali, then I got caught up saying it myself. smh

[…] forward to the end of Murphy’s Law day. I get the first sign of bad news. Apparently I couldn’t move into the apartment right […]